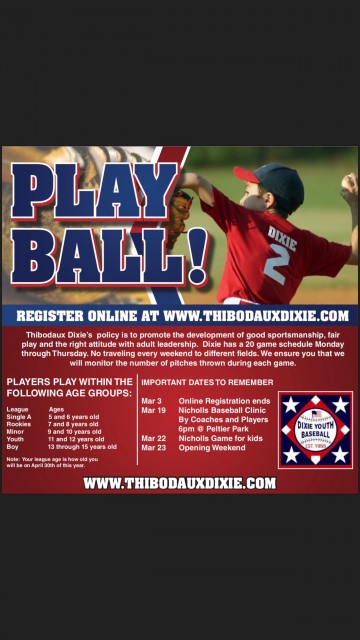 Registration fee is only $40.

Uniforms and equipment will be supplied by league:
hats, shirts, belts, and socks; insurance, balls and umpires

This year Thibodaux Dixie Baseball will have 3 different leagues

Rookies ages 5, 6 will play Coach Pitch and Tee if needed for some

Minors ages 7, 8, 9 will play live pitching arm, with closed bases, which means player can't leave their base until the ball reaches the plate.

Majors ages 10, 11, 12 will play regular baseball rules with open bases which means runners can take leads and they can be picked off.

*Dixie now allows kids to play in as many leagues as they want to, that includes other national, school, or religious leagues and multiple teams at the same time.*